"WordPress is so much more than just a blogging platform"

The longer I work with WordPress, though, the more problems I have with it when I'm building blogs. You see, WordPress has changed. What started out as a humble blogging platform targeted at enabling digital publishing for the masses, has evolved into a fully-fledged website CMS.

In itself, this is not a bad thing. I still think WordPress is an amazing platform, in fact I think it's the best CMS out there. But it's not what I want for blogging. There's too much stuff everywhere, too much clutter, too many (so many) options getting in the way of what I really want to do: publish content.

WordPress is free, easy to use, Open Source, extensible, themable, self hosted and open to everybody. This is where it currently wins, and will always win compared to platforms like Tumblr, ExpressionEngine, Svbtle, Typepad or Squarespace. But it loses on some points, too.

WordPress no longer has a purpose. It's no longer for anything specific, it's for everything you can imagine doing with it. How it's developed internally, too, has changed drastically from creating and evolving features for a publishing platform - to creating and evolving features for people to build their own platforms. Custom Post Types, Custom Taxonomies, Inline Theme Editors, Advanced Menu Systems, Multi-site, Multi-user, Multi-Everything. Using a few themes and plugins, WordPress can be turned into anything from a bug tracker, to an ecommerce store to a comprehensive social network. 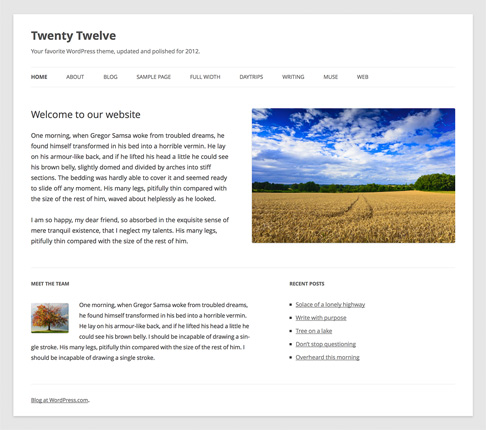 – Matt Mullenweg, co-founder of WordPress / State of The Word 2012

"Recently, it’s become even more evident that WordPress is heavily used as a content management system (CMS) with many more sites now using it to organize any kind of content rather than purely as a blog."

WordPress, by anyone's definition, is no longer "just a blogging platform"

Ghost, is my idealistic and fictional concept for a WordPress-lite fork. It has one purpose, and only one purpose: enabling digital publishing for the masses. Enabling people with more important ideas and things to say than I ever will to publish content online - quickly, easily, beautifully and efficiently. Ghost is about breaking down the same barriers that WordPress originally did.

Like a ghost writer, Ghost, is your ghost publisher. It does the hard work anonymously, getting your content online so you can focus on the most important things: Your ideas. Your content.

How much time do we spend, as content publishers, flitting between browser tabs to check in on the multiple marketing and analytics channels for our blogs? Too much.

Ghost would have a dashboard that you actually want to use. One which pulls in all the relevant content about your blog that you want to see every time you log in. Your traffic levels, your top content, your social media stats, how your authors are performing. Customise it completely to suit your needs, drag and drop the widgets to your own priority levels - or build your own. Think of it like your iPhone home screen.

Manage Posts by Actually Seeing Them

Email clients have had split-view for more than a decade, because it makes sense.

Ghost would have a split view when managing your content so you could browse through your content from the admin panel, without having to edit it. The list would tell you the things you care about, quickly and easily. The title of the post, the category, the date it was published, and how many times it's been read. Without another page load, you could preview every post before deciding what to do next. For blogs with multiple authors, this is a big step up.

A New Writing Screen That Actually Makes Sense for Blogging 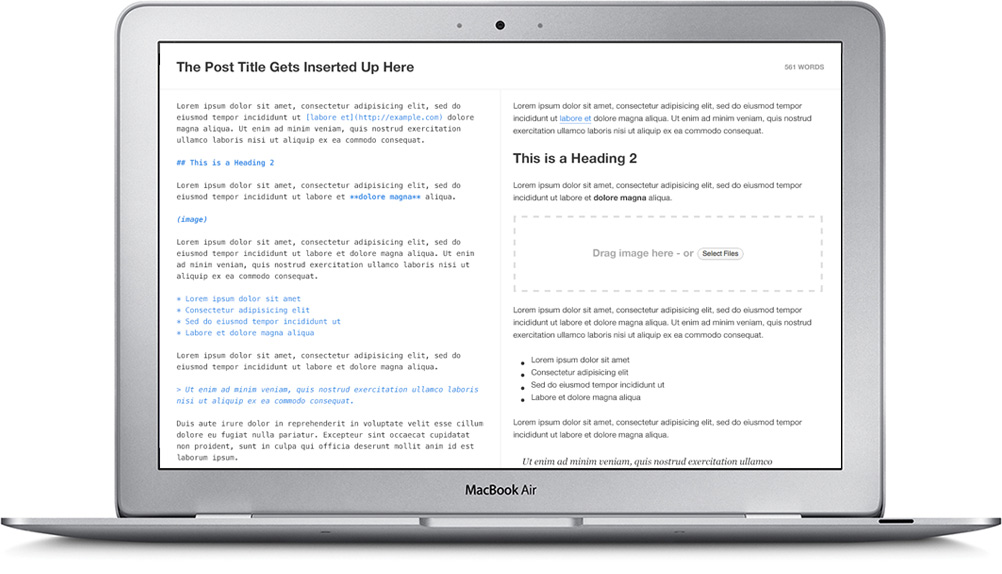 There are two things that destroy my train of thought when writing. The first is having to switch from the keyboard to the mouse every 20 seconds to apply basic formatting to my ideas. The second, is having to tirelessly write manual HTML to achieve the same effect. Neither make sense. Both are largely the only options available.

Ghost would have a new system, using split-view again. Markdown on the left, preview on the right. You focus on writing, applying basic formatting as you go along, and see a live updating preview of exactly how the content will appear on your site on the right hand side. No more clicking, no more (ok, much fewer) brackets and slashes.

Get to a point where you know you're going to want to insert an image later, but don't want to stop writing now? No problem. Just type "(image)" in a new paragraph. Ghost loads an image uploader into your preview area. Drag and drop in the image later. 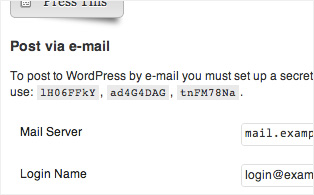 The WordPress motto is "decisions, not options" - and yet there are still too many options, too many settings, too many things which you have an unnecessary level of control over in the administrative user interface. Things like admin colour schemes, quickpress, press this, post-via-email, remote publishing, inline theme editing, media editing and multi-everything. Things that many people have never even used. Ghost would get rid of all that. 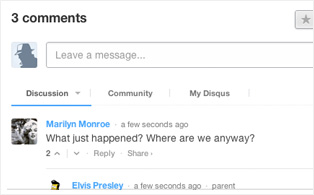 Ghost would have no native commenting system. Many people would still want to have comments on their blog of course, and that's not an issue.

Ghost would have very simple integration with companies who build sophisticated commenting platforms for a living. Like Disqus. By saving time and attention here, we could focus on what's most important for Ghost: Publishing. 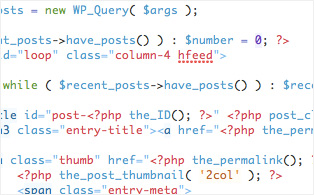 Want to develop for Ghost, but you're a WordPress developer? Cool. It would be a WordPress fork, so it would use exactly the same theme and plugin structure. Your existing knowledge and experience would be transferrable and usable - right away.

This would change, no doubt, over time - but the core would remain the same. 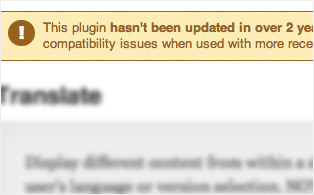 WordPress is amazing, and horrific, at backwards compatibility. You can install plugins and themes which haven't been updated in 5 years on a current version of WordPress and most of the time, they'll still work. This is pretty incredible for users, and to be honest, it doesn't make any sense. Too much focus on backwards compatibility hamstrings future progression. It causes bloat.

Ghost would have cut-off points with major versions, allowing core developers to remove old code from the codebase and evolve the platform to allow it to improve. No one expects an app written for OSX 10.4 Tiger to work on OSX 10.8 Mountain Lion.

Ghost would be the same.

The biggest strength of WordPress is arguably in plugins, but if you take away all the plugins that are non-blogging functionality - you're left with a fairly consistent set of plugins which everyone always uses to achieve the same things: SEO, Related Posts, Google Analytics, Twitter/Facebook/Instagram integration, Inline Spelling and Grammar checks, Contact Forms, Numbered Pagination, Backups. These things don't need to be plugins. Millions upon millions of downloads have proven that these things should be a part of the core platform itself. Instead of making you download Joost de Valk's WordPress SEO plugin with every install - we'd ask Joost to commit his code directly to core. We would treat third party developers who prove overwhelming demand for their code as partners. Simple.

No Corporate Arm of The Law 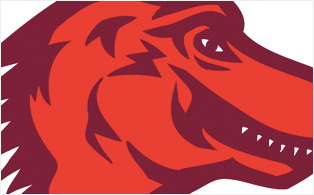 People often say WordPress is free as in speech, not as in beer.

Well Ghost would be free as in Mozilla, not as in Automattic. Ghost would operate 100% as a not-for-profit organisation.

Every decision made would be about improving the software, not the bottom line.

Ghost would be developed openly and it would encourage contribution. Until now Open Source projects have often had an incredibly high barier to entry for contribution, which is so complicated and convoluted that only top-level developers have ever really had a hope of getting involved.

Ghost would facilitate open and easy contribution from people with different skillsets to help grow and evolve the platform. Because designers and developers working together to solve problems always produces a better end result.

Ghost would be developed by talking to its users, its designers, its developers, and companies who build businesses on top of it. It would invite the people who do the most with it to help it grow and improve. It would accept and encourage new ideas.

Wait, who the hell are you?
My name is John O'Nolan. I've been building websites (but mainly blogs) with WordPress since 2005, a year after it was launched. From 2009-2011 I worked as the Deputy Head of the WordPress UI Group, where I helped to design and develop the WordPress user interface - and spoke at conferences all over the world about designing WordPress. I've designed, built, and worked on blogs for companies including Microsoft, Ubisoft, Nokia, Virgin Atlantic Airways, easyJet, MTV, Travelllll.com, Tourism Australia, Tourism Spain, WooThemes, W3 Edge and many others.
So you're saying WordPress is shit?
Absolutely not. WordPress is awesome - it changed my life and made my career - and it's amazing for building websites (The website for Ghost would run on WordPress). But for blogging itself, I think there's room for something more niche and more agile. Something like Ghost.
Dude, you totally stole this idea from [some other person]
Yes, I did. Ghost is almost 100% made up of stolen ideas from WordPress, Geckoboard, Mou, Sparrow, Svbtle, Tumblr, Squarespace and many others. I even stole the idea for this concept-page from .Mail. Taking existing ideas and combining them to make new things. Everything is a remix.
Sounds cool. So… how can I get it?
It doesn't exist. It's just a rough/unfinished idea at this point, but I'd love for it to be something more. If you're interested in getting involved, let's chat. I’m @JohnONolan.
I hate it / hate you / hate everything.
Noted. Haters gonna hate.

Update: This idea was the beginning of Ghost, and went on to raise $300,000 on Kickstarter — Follow @Ghost